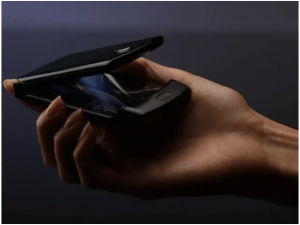 Looks as if the next iteration of the Motorola Razr will sport a new foldable design--something akin to a modernized flip-phone. We know this to be a fact because the company itself has released and image teasing the new design which is slated for official unveiling on Nov. 13.

Business Insider gathered what few details are available into one nice article:

Apart from its Razr-like design, little else is known about the device, and other details are left in the rumorsphere, which primarily originate from XDA-Developers.  If you wanted to abide by rumors, you could expect mid-range specs from 4-6 GB of RAM and a Snapdragon 710 processor. It's also suggested that the new Razr will have a 6.2-inch OLED screen when unfolded, and a smaller display on the exterior, just like the original Razr.

You can read the entire article here, including release information and expected details.

Categories: motorola
Tags: Motorola Razr
Posted By: Luvvitt
Tweets by @LUVVITT_
Compare
Compare
Clear All
You have no items to compare.