Google has announced in a blog post that it would be shutting down its GOOG-411 service soon.

GOOG-411 was started back in 2007 and was a free information service that used voice recognition technology. It enabled a common user, a non internet based platform to contact businesses from a user's phone. Available only to Canadian and US citizens, the service will shut down on November 12, 2010 – barely a month from now .

According to Google, the GOOG-41 service was the precursor to many new voice based technologies that has since then come up. These include Google’s Voice Search, Voice Input you find on Android smart phones and Voice actions. The reason they want to shut down GOOG-411 is because they would like to direct all their resources to build the next generation voice based apps – apart from adding voice recognition ability to a host of other Google products. 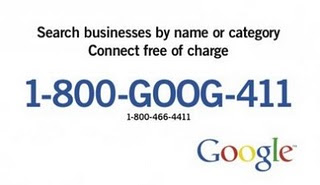 For those of you who are disappointed about this turn of events, here is a little breather. Google has confirmed that an alternative text messaging based service would still remain active.To use that service, text the name of a business to 466453 ("GOOGLE"),and you'd get your search results in the form of an SMS!

Isn't that cool enough?
Categories: android, Voice search, Google & GOOG-411
Posted By: info
Tweets by @LUVVITT_
Compare
Compare
Clear All
You have no items to compare.