Android may not be everyone's cup of tea as an OS to use daily, but there's no denying that it brings a level of customizability that the likes of iOS and Windows simply cannot get close to. It is possible to entirely change the look of an Android device with the help of the right launchers and themes (for better or worse), and while that level of granular control may overwhelm a lot of people, it does have its fans. Today, we bring you an app that can completely overhaul the 'Android-ness' of your Android based phone or tablet, and make its UI a dead ringer for Apple's recently launched iOS 7 mobile operating system. Read on below the break to know more! 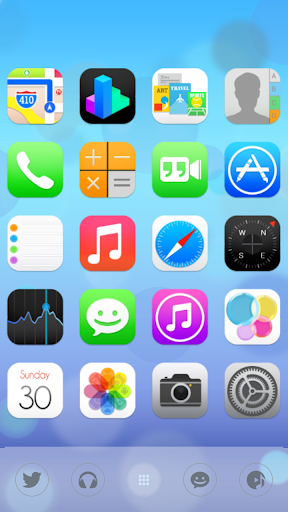 The iOS 7 Launcher Theme lets you skin your Android device UI to something that is a doppelganger for the real iOS 7. It has all the requisite wallpapers, icon packs, high resolution tablet optimized graphics and more to give a really authentic feel of the real thing.

You can download the Ultimate iOS 7 Launcher Theme app from its Google Play listing here. Do note that to theme your OS, you need to install a launcher first. The likes of Apex Launcher, GO Launcher EX / HD, Nova Launcher, ADWLauncher EX / ADW.Launcher, Next Launcher 3D, Action Launcher Pro, TSF Shell, Atom Launcher, Holo Launcher HD, and SS Launcher are what you should be looking at first, and if we had to suggest one name out of all these options, go for the Nova Launcher first, and then get Ultimate iOS 7 Launcher Theme. Happy skinning!