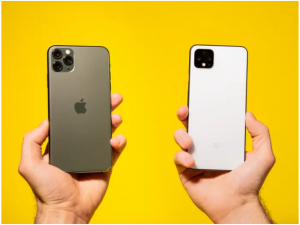 Ultimately, however, it's pretty clear that Apple's iPhone 11 Pro is the overall winner for the best smartphone camera of 2019 and most of 2020 until new phones are announced.

Apple's win is largely due to its fantastic regular and zoomed cameras, including the option of an ultra-wide lens. The iPhone 11 Pro is simply a more versatile camera than the Pixel 4, which only includes a regular camera lens and a zoomed lens. And unfortunately, Google's software magic for digital zooming doesn't make up for the missing ultra-wide camera on the Pixel 4.

The Business Insider article just a thorough breakdown of several different types of photographs, with side-by-side comparisons between the Google Pixel and the iPhone 11.

You can read that entire Business Insider article here.

Categories: Uncategorized
Posted By: Luvvitt
Tweets by @LUVVITT_
Compare
Compare
Clear All
You have no items to compare.