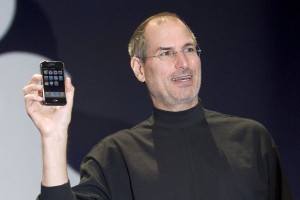 Believe it or not it's been 10 years since Apple engineers (and Steve Jobs) changed our world forever, ushering in the Digital Age by putting massive computing power (and the Internet) in the palm of our hands with the release of the first iPhone.

A lot has changed in the last decade, including myriad copycat smartphones all aiming for a piece of the pie that Apple baked.

Apple’s first iPhone was released 10 years ago this week — on June 29, 2007. While it wasn’t the first smartphone, it leapfrogged far beyond the competition and launched the mobile revolution. Few industries or societies have been left unchanged.

Here are 10 charts that show some of the profound effects the iPhone-led — and Google Android-fueled — mobile boom have caused over the past decade.

But that's just the tip of the iceberg when it comes to how the iPhone changed the world we live in. Check out the '10 charts' right here. And if they've forgotten anything, let us know in the Comments below!

Categories: iphone
Tags: 10 Years of iPhone
Posted By: Luvvitt
Tweets by @LUVVITT_
Compare
Compare
Clear All
You have no items to compare.